Curbridge are a local team that primarily consists of a group of close school friends who see football and their team as a way of keeping fit, having a laugh and staying in touch.

This is only their second season together and after winning promotion in their first season they finished off as runners up in the cup final and won a league title where they had the best defence in the league and kept the most clean sheets. 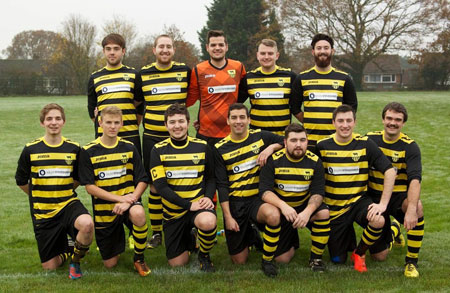 Curbridge play football with excellent spirit and have only received one red card all season (in Sunday morning football this is quite an achievement). It has been a pleasure to go and watch them play this season as their jokes are probably better than their football. They believe that enjoying the game and having a laugh is more important than winning (much to their manager's frustration).

Curbridge got off to a rocky start in both league and cup competitions and only managed a draw in the opening game of the season, conceding a late equaliser. The team were determined to take out their early frustration on their next opponents in the league; they won the game 14-0, and again the following week in the second cup competition by the same score line.

By the end of the season Curbridge were going for the double with a cup semi-final and a few league games left in what was a 3 horse race. The team found themselves facing Mottisfont again in the cup and Mottisfont had not lost all season and after an impressive performance found themselves delivering Mottisfont their first defeat in a 3-2 score line.

Unfortunately we lost the cup final 4-3 but the boys then went on to win the league on goal difference with Dorchester runners-up.

The Curbridge football team is sponsored by Solent Stevedores.